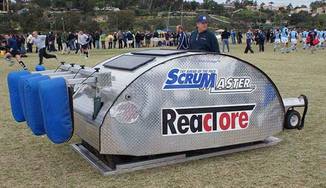 _
Safety: Introduction to Front Row Recent legislation in several states/provinces and counties has highlighted the potential danger of using "homemade devices" to practice scrummaging. Over a two decades of ergonomic research and development has resulted in ScrumMaster becoming the world leader in safe scrummage training. Our R&D team has designed trainers that align the players to the safest positions and in a controlled manor, thus reducing the chances of injury during practices.

Our sledge is a much safer version due to the engagement aid of the contact pad assembly. These pads are constructed of Multi-density foam that is very soft on initial contact and has progressively stronger foundation layers that protects the pressure points on the player’s shoulders.
Once the player's heads and shoulders have been guided to the proper position and pressure is being transmitted through the assembly, the energy is then absorbed by the air spring.

The advantage of using an air spring is, when you first push it, it compresses easily, and the harder you push it, the harder it resists. This means that even if the trainer does not move, it allows for a cushioned platform that is always compressible, reducing the danger of compressive spinal injuries.

Simplicity
Each piece of equipment has been designed with rugby players and coaches in mind. All unnecessary bands, straps, tools and spikes, etc. have been removed. All ScrumMasters require less than 5 minutes to set-up for a session, and often require no setting up at all. They are easily switched from productive training with a formidable professional pack, to introductory training with a youth team.


Safety: Introduction to Front Row
A young athlete is identified as having the attributes to be a front row player, and you would like to develop his skills. Prior to ScrumMaster, developing young players and teaching proper technique was primarily done by putting them in "live game" situations. This, in many cases, was done prematurely (quite often against a veteran prop), and many of these players either "survived" or suffered sever injuries.


The International™ is the only machine in the world that can simulate any scrummaging situation. All movements with the ScrumMaster are under deliberate control. A coach can easily introduce, and talk his player through all situations with absolute confidence and control with no danger to the player.

We take a player, put them through an eight week apprenticeship in addition to normal training with the team. The player would be taken through a multitude of situations and progressively monitored. The player builds complete body strength, especially through the core. Once the player has strengthened and become more familiar with the forces being applied, they are then ready to be placed in a ‘live’ situation with a greatly reduced risk of injury and a confident knowledge of their role in the game.